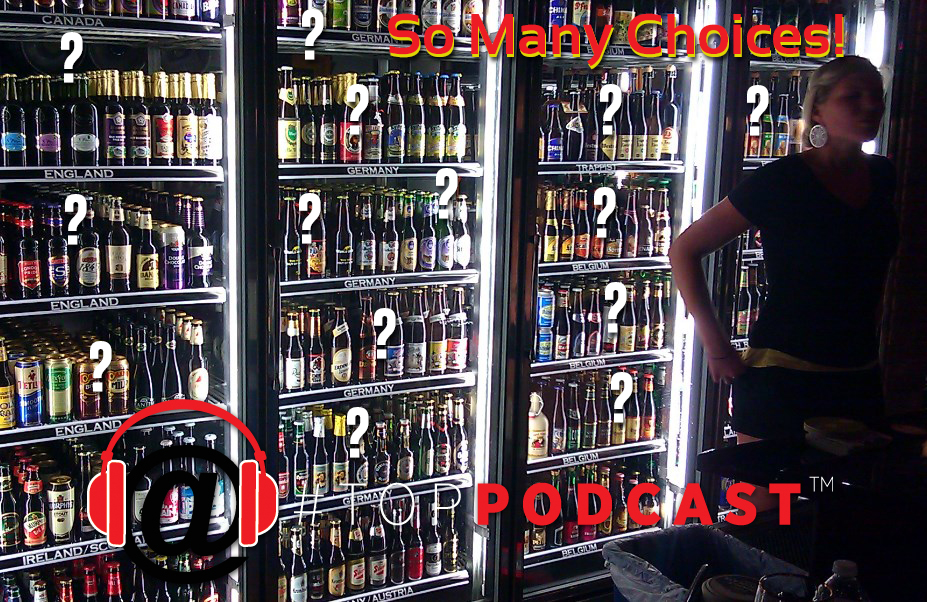 The current podcasting environment, and all the choices within it, surprisingly has many parallels to the craft beer industry. As we continue embarking on what seems to be the golden age for podcasting, the industry itself is going through many of the same growing pains that the craft brewing industry has already experienced.

As some casual beer drinkers eventually changed their consumption habits to craft beer, they are faced with a vast amount of conflicting choices. Conversely, podcasters (and networks & publishers) to a certain extent work to stand out in what is a very crowded and cut-throat environment.

How does one stand out in such a congested marketplace?  Independent podcasters and upstart networks battle daily to make themselves relevant in what some see as a diluted and complex industry.

Independent podcasters looking to make their mark swim upstream daily, fighting to compete with the big boys. Success is viewed in inches, or downloads, hoping to have your show discovered & captured by consumers looking for choices syncing up to their interests…the same way new craft beer roll-outs fight for your attention via units sold.

Craft brewing has launched itself into the mainstream, and in doing so has encountered growing pains. Like all awkward teenagers, developing into adulthood isn’t without a few missteps, some conforming to the crowd, and possible “selling out” of closely kept ideals, which may not fit in with the reality of the adult world. What will the emerging young adulthood of craft beer look like in the near future?

Replace the word ‘craft brewing’ with podcasting, and the same theory may apply.

I can’t help but correlate this sentiment (paralyzation) to the world of podcasting, especially for the first-time listener. Their vast choices, when it comes to consumption, is staggering. As a craft-beer lover, walking into a Beer World while absorbing the staggering amount of choices is agonizing.

Psychologists and economists alike have studied the issue of ‘too many choices’ and have openly concluded that an overload of options may actually paralyze people or push them into decisions that are against their best interests. It might even drive them away.

To a first-time podcast listener (newpods), many are overwhelmed with choices and the cumbersome path to discovery. Moreover, new networks and new show choices can inundate the novice listener, so much so to the point of frustration.

Selecting a Craft Beer vs. Choosing a Podcast

To be clear, I’m not directing this article to the die-hard podcast listeners, as most of you have already figured out ways to cut through the white noise of the industry. However, the sheer number of options within both industries can confuse even the most enthusiastic consumer.

Craft beer can be confusing and even a bit snobby & intimidating, depending where you’re purchasing your brew.

Seasoned pro’s and raw newcomers intersect daily while some ‘snobbish’ insiders even frown upon (or snicker) when a new podcaster feverishly works to promote their show. Others judge those that have never listened to a podcast while craft beer aficionados like to make sure you know that they know their shit.

But the majority of us are here to act as a Sherpa for newcomers, helping navigate such a crowded pool. That’s what TopPodcast.com hopes to do…be your sherpa to the summit of podcast discovery.

Yes, podcast die-hards have figured out where, when and how to discover their favorite shows…but many of the people I know can’t even find the Apple Podcast app on their iPhone, let alone know what the hell Stitcher is.

Until the industry decides to consolidate into a more meaningful way of distribution (Netflix for movies, YouTube for videos), ‘newpods’ (and businesses) are going to continue to find themselves confused and frustrated by the staggering number of choices at their disposal.

There’s no doubt mega-mergers and consolidation ultimately will happen in our industry as it’s happening in the beer industry. But as long as consolidation doesn’t impact our freedom of choice, or most importantly, negatively impact the new independent voices entering the podcasting industry, we will embrace it.

Every day, another network or show seems to be launching.  New platforms will say they can simplify search and podcast discovery for you…and they might even charge you for that right. Really?? Yes, greed sometimes comes in unique forms.

Don’t Be Paralyzed – We Simplify Discovery for First-Timers

TopPodcast.com hopes to prevent first-time listeners from becoming paralyzed and turning away from our amazing industry. And we won’t charge you for the right of discovery…

And we’re here to help prevent you from being paralyzed with choices!