Bottom line, it compels others in the industry to innovate, create, and move the machine forward.  And Spotify is embarking on this ambitious project by working with industry leaders Gimlet Media, Slate, Panoply Studios & Loudspeaker Network.

No doubt, Spotify stepped up their game with their most ambitious podcast yet…MOGUL…a six-part ‘Spotify Original’ series, partnering with Loud Speakers Network & the aforementioned Gimlet Media.

Targeting their already built-in hip-hop audience, the initial run of MOGUL can currently be found only on Spotify’s mobile app…so for the Spotify user that loves hip-hop, this podcast is for you!  Look for a broader release of the podcast, beyond Spotify, in mid-June. 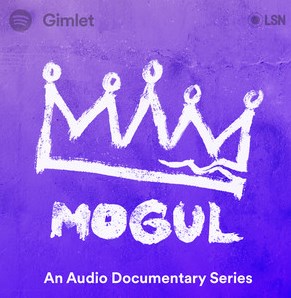 Who is Chris Lighty? You Need To Listen!

Editorial Note: Below paragraph from Wikipedia

Chris Lighty ‘was an American music industry executive, who co-founded Violator, a record label, management, and marketing company, which represented hip-hop artists such as Nas, Ja Rule, Mobb Deep, Missy Elliott, LL Cool J, and 50 Cent.’ The New York Times once called him ‘one of the most powerful figures in the hip-hop business.

On August 30th, 2012, Light was found dead in his Bronx apartment from an apparent self-inflicted gunshot wound to the head, after an argument not long after being involved in an argument with his ex-wife Veronica.

“Mogul: The Life & Death of Chris Lighty” — a six-part Spotify Original series that was produced in partnership with Gimlet Media and Loudspeaker Network — sees its first two episodes debuting on the service today, marks the streaming titan’s first foray into documentary series podcasting, telling the music entrepreneur’s bootstrap rise from Bronx kid to manager of iconic hip-hop artists (Diddy, Missy Elliott, Busta Rhymes) to his unexpected suicide in 2012 at just 44 years old. It’s a markedly comprehensive undertaking hosted by Reggie Osse (of the popular Combat Jack podcast) that features Lighty’s mother and sister as well as musicians like Fat Joe, N.O.R.E. and Warren G speaking on his life and impact on the hip-hop community and beyond.

A Natural Pivot for Spotify as Online Audio Grows

While Spotify’s vast platform encompasses music lovers of all kinds, the aggressive move towards original podcasts seems like a natural pivot…particularly because of the powerful targeting ability with their user base as well as the increased trajectory of podcast familiarity.

Of the number listening to online audio each month:

In regards to Spotify’s brand:

This pivot makes perfect sense as listening habits are evolving and they can create targeted podcasts for specific audiences within their platform. Most importantly, I believe it will drive first-time listeners (who use Spotify) to explore the podcast medium beyond Spotify’s network.

Pivoting into original podcasting felt like a natural turn after hosting licensed podcasts on the service for years, said Tom Calderone, Spotify’s global head of content partnerships. “People love listening to podcasts,” he said. “What we felt is important is that Spotify has its imprint and footprint in original storytelling, particularly when it came to music. We thought it was perfect for a start in that model. Because of some of the subsets we’ve seen on the licensed podcasts, having an expression of original was really important to the Spotify studios.”

Why ‘Mogul’ Matters to the Industry & Spotify

Spotify can easily target unique ‘genres’ within their platform, creating targeted podcasts that align with their users listening habits. Bottom line, data rules…and they own a vast amount of data. It’s a powerful way to drive podcast engagement and drive new listeners (Newpods) to the medium.

For example, in regards to their hip-hop targeting:

Based on those massive numbers, targeting Hip-hop listeners with a compelling podcast makes perfect sense. And as they dive into additional genre’s, Spotify will become a MAJOR PLAYER in the content curation and production of custom podcasts.

There’s no telling where Spotify decides to take the medium or how aggressive they decide to move. All signs are pointing towards a big move. Curating custom podcasts that target the listening habits of their user base is brilliant. No doubt, Spotify’s strategic entry into the medium will galvanize the podcast industry.

As Calderone summarized in the Variety article:

Also, knowing that audio is truly the intent of our users, that this would just complement everything about Spotify when doing an audio documentary like ‘Mogul.’”

Well said, well said! Podcasts are a perfect compliment to everything Spotify is about! And #TopPodcast can’t wait to see what they do next.

All Signs Point Towards Continued Investment

Investment in the podcast platform is absolutely occurring at Spotify with additional headcount in the podcast division. On a personal note, we wish a former colleague of mine at CBS, Greg Herman, all the best as he takes on a Podcast Manager position at Spotify. Good luck young lad! We are sure you will crush it, just like your father has, Scott Herman, COO of CBS Radio, who has provided me dozens of career ‘nuggets’ over the last few years, of which I keep secured safely in a shoebox.

One of my personal favorites…

‘Never sign anything at 5pm, when walking out the door…wait until the next day. That’s one of the reasons you stay employed for nearly 40 years with the same broadcast company.”

Onward & Upward! It’s a great day to be in podcasting!

The #TopPodcast Research Center Is Open For...